It’s been a couple of weeks since I’ve posted, and sadly this one isn’t writing-related. Those who’ve been reading my blog know that my mother suffered from dementia and was diagnosed with pancreatic cancer one year ago. By March the cancer had spread to her liver and our family doctor estimated that she had only two or three months left. My mom’s dementia made her oblivious to her dire situation. Even when told the truth, her emotional response seemed dim, and within minutes the diagnosis was forgotten.

My mother passed away in hospice care on June 23rd . Neither my sister nor I were there. I’d seen her the day before and had been out all day at an event that Sunday. My sister had planned to visit, but her significant other suffered a heart attack on June 12th and she was exhausted from the worry and daily commutes to the hospital. (It was touch-and-go for a while, but it looks like he’ll be okay. A medical procedure is required but rehab is underway).

It sounds strange to write this, but we were stunned by the call from the hospice nurse. We truly believed we’d have a little more time with her. We’d met with the doctor on Wed., the 19th, who thought she was doing well under the circumstances, and might have four to six weeks left. We understood that this was a guess, and our family doctor cautioned me that pancreatic cancer is wildly unpredictable. She was in hospice three weeks and two days before she passed.

I should have picked up on the signs that the end was near. When I took my son and daughter to visit her on the 16th, she’d been unusually alert and conversational She blew us kisses the last time my sister and I saw her—something she’s never done in her life. She apparently had the nurse help her call her sister in Toronto that Sunday afternoon. For weeks she’d not felt well enough to talk on the phone at all, let alone make a phone call.

Also on June 23rd, my daughter’s good friend, and matron of honor at her upcoming wedding, lost her grandmother that same day. 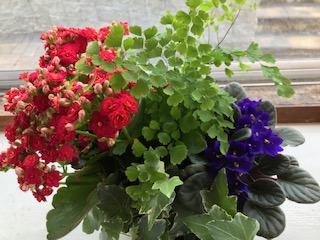 Five days earlier on the 18th, I had to have our twenty-year-old cat Mimo euthanized, as he became too ill to go on. The beautiful flowers in the photo were sent by our vet’s staff who’d been overseeing his care since we brought him in for his first shots back in August 1999. Also on the 18th , my future son-in-law’s family lost their beloved dog to cancer.

I took time off from the day job to reflect, to rest—or try to—but I’m now back at work, which is fine. I like the routine, to focus on other things for part of the day.

Memories swim through my head. I have a room full of her furniture and some belongings that I’d moved out her assisted living apartment two days before her death. There are things to sort through, legal things to take care of.

But there are also things to look forward to, such as my daughter’s September wedding, quickly followed by a move into their new home. My son also began an exciting new career the last week of June. I’m getting back to writing. My lovely coworkers are giving me a rose bush to plant in Mom’s memory. It’s perfect. She wouldn’t want any fuss and mourning or feeling sorry for ourselves.

I’ve learned a lot this past year about life and death, and many things. I’ve said goodbye far more than I wanted to last month, but I’ll cope and move one step and one day at a time. And I’ll remember.

33 thoughts on “Coping With a Difficult June”