As some of you know, I’ve now reached the last week of my day job and will retire on Friday. In many ways it’s the end of an era. Although I was a stay-at-home mom in the 90’s, I returned to the work force when my youngest was seven and have worked different types of jobs over the years.

This last stint was at Simon Fraser University. Oddly, it was also one of my first jobs. When I was just twenty years old in the mid-70’s, I landed a job in SFU’s Registrar’s Department. I didn’t like my supervisor, so I eagerly took a job in the Computing Science Department, working as a secretary for the department chair. The man had a formidable reputation as being difficult to work with and the position had been vacant for some time. He turned out to be one of the best and most interesting bosses I’ve ever worked for. He was one of those conducting research to establish a definite correlation between cancer rates and asbestos workers, and all we know how that turned out.

My husband graduated from SFU. Although we were both on campus at the same time, we never met until years later where we both wound up employed for the same company. My son and daughter have also graduated from the university, and it was my great pleasure to see them receive their diplomas.

I returned to SFU in the fall of 2013, where my sister also worked. In fact, I got her started in the Registrar’s office way back then, but she stayed and I left to return to school full time. For a year, we were both up there again until she retired in the fall of 2014.

My first job back on campus was a year-long- temporary assignment in the Biology department. When that ended I was offered another year-long position in the same department, and from there I moved to continuous, part-time employment in Linguistics. Continuous employment meant that the university would subsidize my son’s university education. I worked 60% of a full-time week, and the university paid for 60% of his education. It was a great deal.

My son graduated two years ago with a degree in chemical/physics (minoring in computing science),  and I stayed on, partly because he wasn’t sure what, if any, job he’d find and I had visions of him going to grad school. But that didn’t happen. He wound up with a great job.

I have to admit that working 40-50 hour weeks at my writing and day job for the past seven years has worn me out. Compounding things was my mom’s dementia and cancer in 2018 and 2019. It’s been almost a year since she passed away. 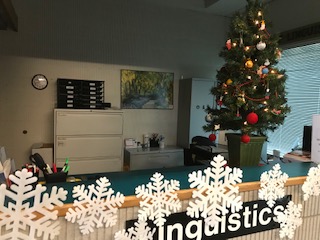 My daughter’s in the last trimester of her pregnancy, and I feel that now is the right time to leave. An important new chapter in my life is about to begin and this grandma doesn’t want to miss a thing. Of course, I’ll still keep writing and publishing, though I might slow down a bit. Or not. We’ll see.

13 thoughts on “Reflecting On The End Of An Era”