I’m starting 2018 by offering two giveaways, one for each my recent releases, on the Goodreads site.

My 5th Casey Holland mystery, Knock Knock (published in November) is offered to anyone in the U.S. and Canada until January 24th!

For those of you who aren’t familiar with the huge Goodreads site, there are plenty of other books up for grabs, so best of luck!!

Evan Dunstan’s spunky grandmother is giving him major headaches. As organizer for the seniors’ Christmas craft fair, Gran faces warring vendors and acts of vandalism that threaten to ruin the event. When nasty knitter Cora Riddell is knocked unconscious and her water spiked with a hallucinogen, Gran begs Evan to find out who’s responsible before more harm is done—or someone dies.

In charge of the fair’s security, Evan faces a challenge that grows more difficult by the hour. His boss expects him to find the culprit before police are called in and Southwest Trades & Technology’s reputation as a safe campus is destroyed.

A friend or foe?

A search for answers reveals the disturbing possibility that even friends and coworkers hope Evan will fail. Is the culprit closer to him than he thought? Whose startling secrets must be exposed to find the truth?

When plotting a mystery, I ask myself one essential question. What if?

The idea for my second Evan Dunstan mystery (to be released one week from today), A TOXIC CRAFT, was born from that question and a very specific setting.

One of my favorite pre-Christmas activities is to sell my books at local craft fairs. I’ve attended several high school fundraisers, many of which have knitters selling their goods and trust me, they take their business seriously.

One year, my table was placed between a pair of knitters, who seemed well aware of each other, yet didn’t strike up any conversation. Furtive glances at one another’s tables suggested that there might have been a bit of competition between them.

By late afternoon, the fair’s attendance had slowed down, which gave me plenty of time to ponder craft fairs, big and small, and think about crime. For this mystery author, it was a natural progression to ask, what if a vendor took her rivalry a bit too far? What if she was a little bit crazy? A little bit violent?

I have to say that in real life everyone’s been friendly and generally have a good time selling their crafts. But in my line of work, I don’t deal in real life. Evan’s situation is much crazier, especially when his feisty grandmother’s involved. As this book shows, Gran has a real knack for annoying people. Find out just how much trouble she gets into in A TOXIC CRAFT, on December 6th!

To pre-order, go to: 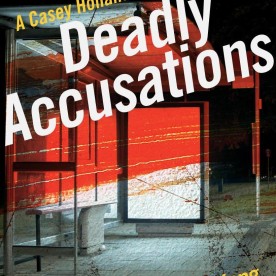